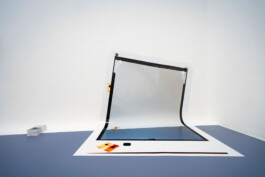 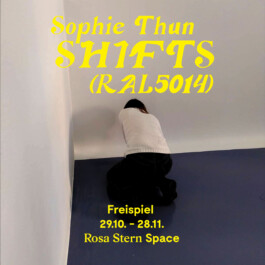 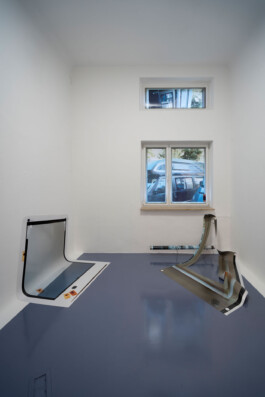 We are happy to announce the third edition of FREISPIEL: a short-term residency where we invite (inter)national artists to live, produce and finally present an exhibition in the Rosa Stern Space. Our next guest will be Vienna based artist Sophie Thun.

With SHIFTS we present Sophie Thun's first solo exhibition in Munich. During her residency, the artist developed new site-specific works that turn the space and its surroundings into settings, while occupying the entire architectural structure of the space. Between spatial image and pictorial space, recording and exposure, staging and representation, appropriation and construction, difference and repetition, blurring and precision, a conundrum begins - trompe-l'Œil vs. excessive mimesis.

Sophie Thun calls her solo exhibition at Rosa Stern Space SHIFTS (RAL5014) and this title is programmatic both in the presentation of the photographic works and in the work complex of the artist herself: In german, Shifts means 'deferral', 'displacements' or even 'layers'. At the same time, it refers to a photographic function - the so-called parallel shift - in which the camera lens can be shifted parallel to the image layer. This is done, for example, in order to take distortion-free architectural photographs without converging lines. 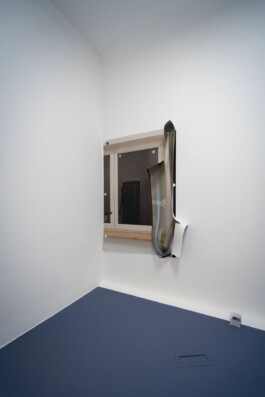 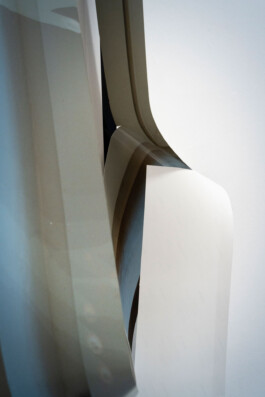 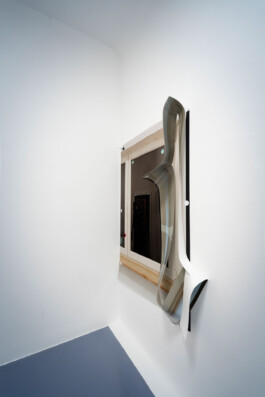 Sophie's multi-layered photographs and their arrangements in space are not 'distortion-free'. Rather, they perfect a form of subtle pictorial displacement and thus a displacement of our perception-not least that of the exhibition space itself. For Sophie works primarily site-specifically, usually in a 1:1 scale. SHIFTS (RAL5014) is therefore not only the result of a short-term residency at Rosa Stern Space in the specific, but exemplifies the artist's working method in general. 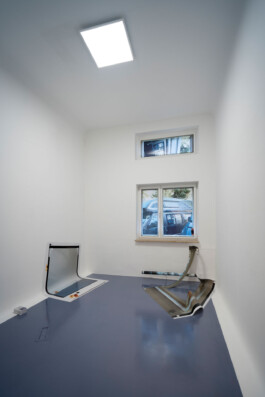 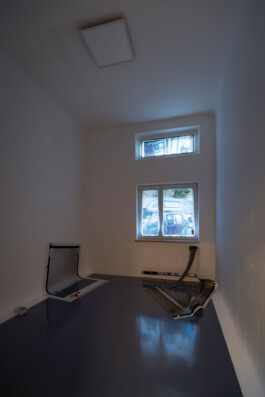 This becomes obvious in the main room of the exhibition, where three large-format prints deal with its architectural features. The gaze of the visitor entering the room will probably first fall on the window opposite. But its reception - and thus that of the entire room - changes depending on the time of day. This is not because outside there is daylight, twilight, or nocturnal darkness.

Rather, the view from the window remains the same for the duration of the exhibition and is removed from any temporality: As in a diptych whose two relief panels cannot be folded together but only unfolded, Sophie has placed two prints on the glass surfaces that show us the photographic view through them in sunshine and of two large black delivery trucks that are said to always be there. In terms of photographic history, this refers to Louis Jacques Mandé Daguerre's View of the Bouelvard du temple (Eight A.M.) (1838/39), William Henry Fox Talbot's Bay Window at Lacock Abbey (1835), or Joseph Nicéphore Niépce's Heliography View from the Study of Le Gras from 1826, the latter now considered the oldest surviving photograph. These iconic photographs shaped the persistent paradigm of photography as a window, and with it that of a supposed indexicality of the medium. Sophie, in turn, satirizes the topos of a truth of photography, for she adds another to the two sections of the image: In the horizontal upper window section, it suggests the view of a supposedly falling sprinter. Humoristically, she thus also criticizes a patriarchal historiography of art and photography, for as intra-pictorial spatial boundaries, windows or door frames are considered "intersections of inside and outside," which, according to Irene Nierhaus, are "historically organized as opposites related to one another and ultimately as signs of gender difference that have become nature." 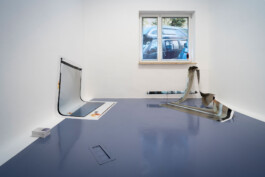 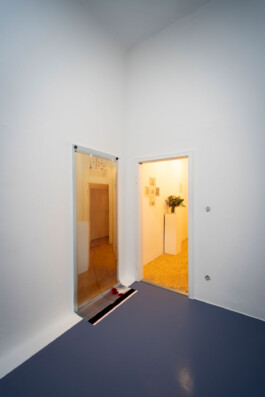 Such irritating displacements characterize SHIFTS (RAL5014) and can be found elsewhere. In a print, for example, which shows the central perspective view from the exhibition space into the corridor of the Space, but reflects it around the corner onto a wall projection. In the style of an illusionistic trompe-l'œil, this simulates a doubling of the rooms, which can be understood as a reminiscence of the door that Duchamp installed in his studio in Paris as a connection between three rooms: it always closed one and thus opened the others. Not least with the help of the visible black negative borders, Sophie emphasizes the pictorial mediatedness of the room and stresses the pointing potential of the photograph. In this way, she subverts a mimetic moment in order to provoke a reflection on what is depicted and on the space that surrounds us.

Within this shot we discover the hand of the photographer herself. She holds the remote shutter release; with her, the image narrative literally becomes an action. In a tradition of female self-representation, the artist physically inscribes herself in her photographs: By means of photographic tools, she marks herself as a creator of images and elevates the artistic work itself to the subject of the image. The artist's body becomes an object, a material and an instrument at the same time. Sophie repeats this concept in a number of photographs, including a large-format self-portrait in the bathroom of the Space. 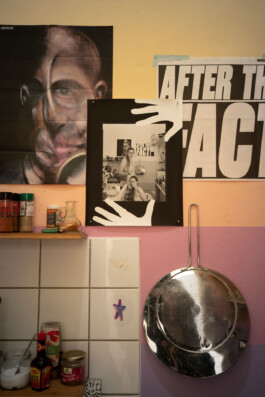 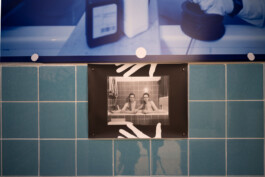 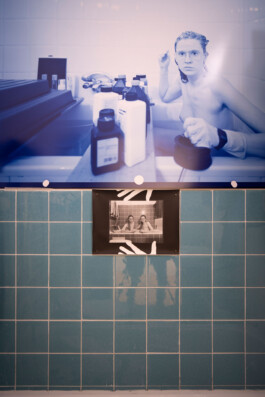 Directly above the bathtub it shows the unclothed artist with lathered hair in a bathtub, which she has converted into a photo lab: In front of her are chemicals (developer, fixer) as well as laboratory dishes. This refers to Sophie's working method, because she produced a large part of her work while traveling as an assistant to predominantly male artists: always at night and often in hotel rooms. Especially in Munich, the image of a female photographer in a bathtub probably always recalls Lee Miller's iconic shot in Hitler's bathtub on April 30, 1945. Despite the formal proximity, Sophie's self-representation rather suggests a profound aestheticization and commercialization of the social. For female artists in particular, however, private space as a place and object of artistic work has not only been normal since late modernity, but has long been a precarious necessity. One of the central social uses of photography supports this association: the presentation of photographic images of a (living) space in the same space refers to the medium as a memory-constituting apparatus of the familial. Sophie regularly subverts such photographic documentarisms. In Self-Portrait of the Photographer in the Bathtub, the artist again brings her hand into the picture, this time as a photogram: Its brightly illuminated outline protrudes into the pictorial space, creating a mise-en-abyme (image within an image). This hand presents the artist's distinctive glasses. 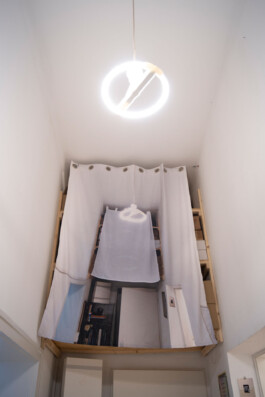 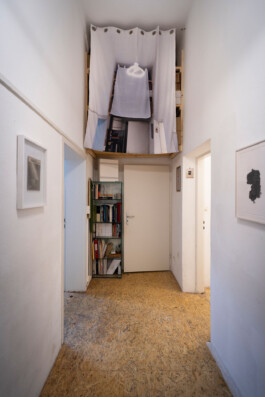 Their ground lenses are an everyday object of a perception-constituting optical technology and the basis of (analog) photography at the same time. Sophie is thus able to identify the photograph as a personal view of the photographer on herself, on artistic work, but also on a general order of things. Her gesture of pointing in turn draws our attention to our culturally and technologically determined habits of seeing. In this way, Sophie Thun subtly breaks the old paradigm of photography as a window into reality. 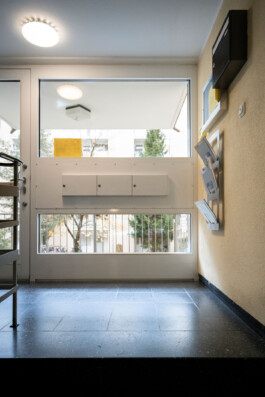 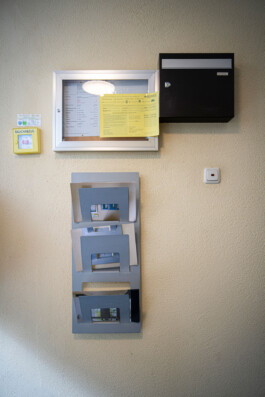 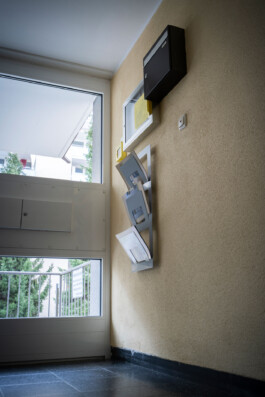 Sophie Thun (*1985) lives and works in Vienna, where she studied painting and photography with Daniel Richter and Martin Guttmann at the Academy of Fine Arts. Her work was most recently on view at Liste Art Fair Basel and has been shown in numerous solo exhibitions including C/O Berlin, Kim? Contemporary Art Center, Riga (LV), at ART FOYER, Frankfurt, at Folkwang University of the Arts (Essen), at Camera Austria (Graz) and at Secession (Vienna). Works by her are in the permanent collections of the Museum der Moderne (Salzburg), the Landesmuseum Oberösterreich (Linz), the Smart Museum (Chicago) and the Verbund Collection (Vienna). In 2021 Sophie Thun was awarded the outstanding artist award - Artistic Photography by the Austrian Federal Ministry of Arts and Culture. She is a member of the artists collective <dienstag abend> and is represented by Galerie Sophie Tappeiner in Vienna. Upcoming solo exhibitions include Kunstverein Hildesheim and the publication of her first monograph in the Phileas series, which presents the work of promising and emerging artists based in Austria.